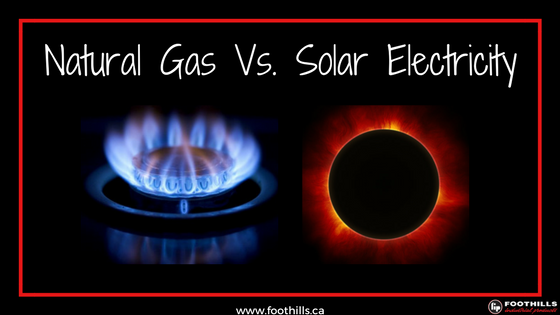 A contentious issue globally, and within the energy industry in particular, is the need to reduce our carbon footprint by minimizing greenhouse gas emissions.

One way to address this concern is by incorporating more clean energy into our energy mix. As shown in the chart below Canada’s current energy mix reveals that natural gas provides 34% of our energy needs and solar energy is included in the 6.1% along with other renewables.

This is a significant difference and leads us to question whether more solar energy should be incorporated into the mix. This post attempts to guide consumers to a conclusion by contrasting the benefits of using natural gas versus solar energy.

What is “Clean” Energy

Most people can clearly link solar energy to clean energy. But what is clean energy? The term clean energy is often used interchangeably with renewable energy. According to Natural Resources Canada (2016),renewable energy is defined as energy obtained from natural resources that can be easily replenished or renewed within a human lifespan, leading to the conclusion that these resources are sustainable. The different types of renewable energy are as follows: solar, wind, tidal, hydro, biomass, geothermal, and renewable natural gas.

The Globe and Mail (2016), predicts by 2022, that it will be cheaper to build and provide a gigawatt of wind power than the cheapest fossil-fuel alternative, and solar will be close afterward. The reasoning behind this prediction is that wind and solar are both developing as technologies, therefore their costs will continue to drop with time and increase with economies of scale. On the other hand, fossil fuel technologies are more mature and likely have less room for innovative cost reduction.

Everything You Need to Know Solar Energy

Solar energy is derived from the sun’s radiation and is converted into thermal or electrical energy. Solar energy is the cleanest renewable energy source that is available, but it comes with some major challenges as displayed below, cost being the most dominant.

The average efficiency of solar panels used to be about 15%, recently a company called First Solar (2016) has increased this efficiency rate to 22.1% by using experimental cells made from cadmium telluride.

The average cost of a solar installation is between $15,000-$29,000 for an average sized system between 4kW and 8kW (Sunrun, 2017). On top of this batteries are another cost that must be factored in, adding another $5,000-10,000. Finally, solar panels typically have a lifespan of ten years before they need to be replaced.

Levelized energy costs (LEC)- represent the total cost to build and operate a new power plant over its life divided to equal annual payments and amortized over expected annual electricity generation. This formula includes all associated costs from the initial capital, return on investment, continuous operation, fuel, maintenance and time required to build a plant and its expected lifetime (Renewable EnergySources, 2017).

The average levelized cost of solar energy in the U.S. is 12.2 cents per kWh (U.S. News, 2017). This cost is very comparable to what we pay here in Calgary which is one of the lowest rates in the world as described in the chart below.

*The following images display the variable cost of grid energy in Calgary including distribution, transmission, and local access fee compared to the levelized cost of solar energy in Alberta.

Overall solar energy is still an emerging technology that has potential to provide many benefits to energy consumers in future years. However, right now it seems that the negatives such as weather and location dependence, reliability and high costs still seem to outweigh the positives. Next, we will look at natural gas and the pros and cons to using this energy source.

In recent years, natural gas has also become available from renewable sources as well as traditional ones. Renewable Natural Gas (RNG) is a locally produced, carbon neutral energy source. It can be created from the decay of organic waste produced from farms, landfills and waste water treatment facilities; this is called biogas (Fortis BC, 2017). From here, the biogas is captured and purified, until only methane remains, and finally injected into the natural gas distribution grid.

According to the Alabama Gas Corporation (2013), 90% of the natural gas that enters the pipeline reaches the end consumer, and only 10% of the energy is lost in the process due to leaks and inefficiency. This is impressive when compared to other forms of energy.

Natural gas is a vital source of energy for consumers for many reasons including the fact that it’s a versatile fuel source, abundant, safe and the cleanest of the fossil fuels. Another distinguishing factor is cost; natural gas rates remain significantly lower than electricity (more than five times cheaper) as displayed in the infographic below.

*This image depicts the significant price difference between natural gas and electricity based on rates in Alberta, Canada.

Where the Future of Energy is Headed

As previously mentioned there is a growing concern globally to reduce greenhouse gas emissions. The use of renewable resources is slowly increasing, but price is still a major concern. Solar power is still considered a developing technology where prices will continue to drop as innovation advances. However, the timing might not be quite right to vastly increase production and usage of solar.

According to a recent article from Bloomberg (2017), “gas will play a significant role in the decades to come…coal will decline much, much faster, but gas probably needs also to accept that its own role will not grow to eternity.” While it’s difficult to determine whether these forecasts will hold true, in general, there is a distinct trend toward cleaner alternatives that produce lower greenhouse gas emissions. A combination of renewables and natural gas is what we can expect as shown in the chart below. Thus it’s clear that natural gas will remain an important energy source for future generations.

*This graph shows projected growth of both natural gas and renewable energy sources up to 2040.

Is there anything thoughts or opinions on this topic that you would like to share? We would love to hear from you.

The Globe and Mail (2016). Canada well on its way to a renewable energy future.