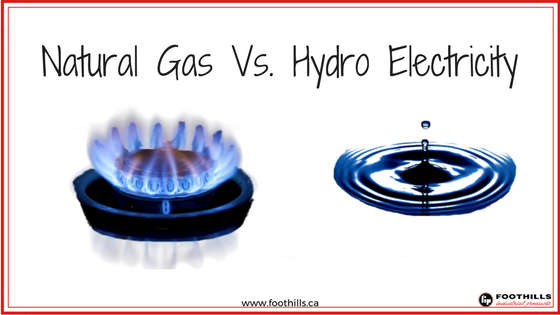 Energy- we as consumers need it to survive. The demand for energy in our modern world is ever-increasing. The pursuit now involves finding the most efficient, reliable, affordable and environmentally friendly options available.

Renewables are growing in popularity for obvious reasons but they do come at a high price. On a related note, did you know that Canada is the second largest producer of hydroelectricity in the world? This substantial fact leads us to the question of increasing our hydro production even further. Currently, natural gas remains our nations highest utilized energy source, as seen in the chart below. This post aims to explore the various reasons to continue using natural gas to a higher degree, as opposed to increasing renewables such as hydropower. 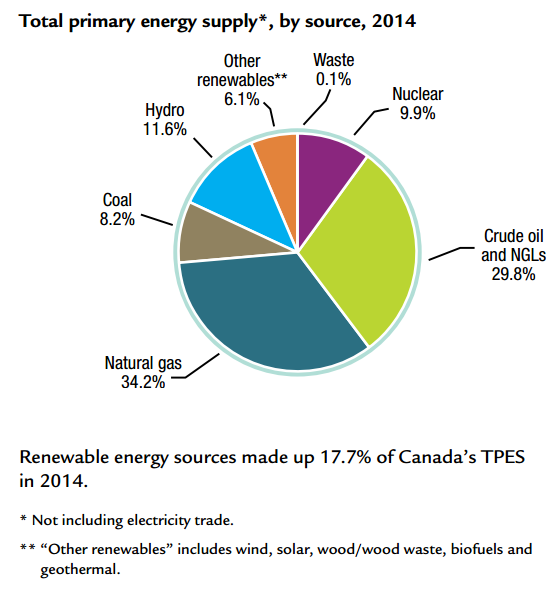 According to the Globe and Mail (2016), Vancouver has already begun the controversial restrictions of natural gas in new buildings. This change has many concerned that it will cost consumers a hefty price. The question of the abundance of alternative fuels, such as biofuels, adds to the uncertainty.

A recent article from the Financial Post (2017), revealed that two-thirds of Canada’s electricity now comes from renewable energy. In 2015, Canada produced about 10% of the hydro capacity worldwide second only to China at 29% (see the chart below). 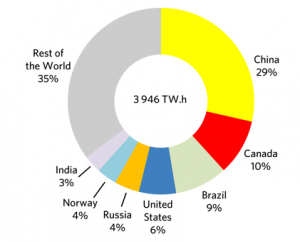 Hydropower is created when flowing water creates energy that can be captured and turned into electricity. This energy source typically uses a dam on a river to store water in a reservoir. From here the water is released from the reservoir and is sent through a turbine, where the spinning activates a generator to produce electricity (RenewableEnergyWorld.com, 2017).

A pumped storage plant is another type of hydroelectric plant. With this option, power is sent from a power grid to electric generators, from here the generators spin the turbines backward allowing water to be pumped from a river or lower reservoir to an upper reservoir, where power is stored (RenewableEnergy.com, 2017).

Hydropower is the most efficient way to generate electricity. Modern hydro turbines can convert up to 90% of available energy into electricity (WVIC, 2017). Most fossil fuel plants are only about 50% efficient.

Hydropower does have many positive attributes beneficial to our energy mix. A high-efficiency rate of 90% is very impressive, along with the low cost to produce. Higher costs do accumulate when factoring the price of installing electric lines to cities, as locations are often remote. Other major drawbacks include the impact on fish populations and local environment.

What You Need to Know About Natural Gas

In recent years, natural gas has also become available from renewable sources as well as traditional ones. Renewable Natural Gas (RNG) is a locally produced, carbon neutral energy source. It can be created from the decay of organic waste produced from farms, landfills and waste water treatment facilities; this is called biogas (Fortis BC, 2017). From here, the biogas is captured and purified, until only methane remains, and finally injected into the natural gas distribution grid.

Natural gas is a vital source of energy for consumers for many reasons including the fact that it’s a versatile fuel source, abundant, safe and the cleanest of the fossil fuels. Another distinguishing factor is cost; natural gas rates remain significantly lower than electricity (more than five times cheaper). Natural gas is not a perfect fuel by any means and does come with setbacks such as producing greenhouse gases and is also highly combustible.

As part of the modern world, we all require reliable energy to carry out the lifestyle we have become accustomed to living. This means the hunt for the best energy sources is still on, as each type comes with its own set of pros and cons associated with usage. A recent trend is renewables increasing in popularity, with two-thirds of Canada’s electricity now being provided from renewable energy. More specific to hydro, Canada is the second largest producer of hydroelectricity in the world. For the time being natural gas will remain the major powerhouse in Canada, some of the main reasons being affordability, reliability and clean attributes. Recent improvements have been introduced such as renewable natural gas and more efficient technology, which combined are working to keep gas competitive within the energy market. The future of energy is looking like a combination of renewables with natural gas used to support reliability and keep costs contained.